Have you heard about the 50p coin that many thousands of people have found in their daily pocket change which was sold on e-Bay for prices upward of £100.00. Or to put it another way, 200 times its actual value?! 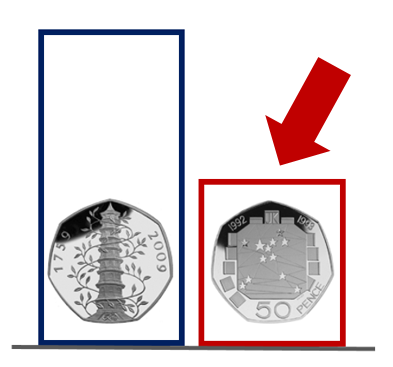 It was all because in 2014 The Royal Mint announced that the Kew Gardens 50p coin is the UK’s most scarce circulation coin, with just 210,000 pieces ever been placed into circulation. The result was a media storm and the inevitable overnight ramping of prices.

Half the circulation of the Kew Gardens 50p

But what few people realise is that there is an even rarer UK 50p piece that was issued in half the number of the Kew Gardens coin – just 109,000 coins.

The coin was issued in 1992 to mark the EC Single Market and the UK presidency of the Council of Ministers – perhaps not the most popular of topics, which maybe was the reason so very few were pushed out into circulation. But of course, its lack of popularity at the time, is the very thing that now makes it Britain’s rarest 50p coin.

Sadly, however hard you search, unlike the Kew Gardens 50p, you will not find this one in your change. That’s because it is one of the old-sized 50p coins that were demonetised in 1998.

The coin itself was designed by Mary Milner Dickens and pictures the UK’s place at the head of the Council of Ministers’ conference table. The stars represent each of the nations’ capital cities placed in their relative geographical position.

But it won’t be the coin’s clever design that will guarantee its numismatic interest for years to come. It is its status as the UK’s most rare circulation 50p is what will intrigue collectors and have them searching and saving up in years to come.