The Royal Mint have confirmed that next year they will honour the life of wartime heroine Edith Cavell on a new £5 which commemorates the centenary of her death during World War One.

The announcement comes after pressure from relatives of Cavell who recently submitted a petition with over 100,000 names to Her Majesty’s Treasury in a passionate appeal for her to be included in any First World War commemorative plans.

A sense of injustice has been felt ever since Lord Kitchener was revealed as the face of the new 2014 £2 coin.  Critics have branded his ‘Your Country Needs You’ message as jingoistic, and completely juxtaposed to the bravery of Edith Cavell who sacrificed her life to help around 200 allied soldiers escape from German-occupied Belgium.

The face of a wartime heroine

Our blog on a possible Edith Cavell £2 coin earlier in the year included a poll which offered you the choice between the Lord Kitchener £2 and our artist’s impression of an Edith Cavell £2, featuring her portrait and famous last words “Patriotism is not enough”. 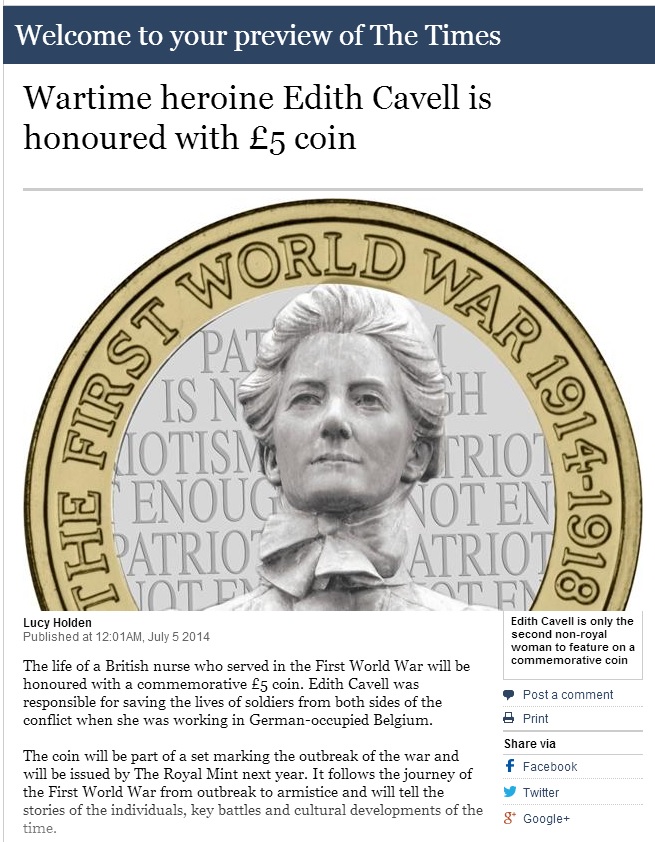 The result: Edith Cavell and our artist’s interpretation of her commemorative £2 coin triumphed.

In fact, it was such a well-received design that the Times have picked it up in their editorials and mistakenly believed it to be the new design for the £5 coin next year!

It remains to be seen whether the new 2015 £5 coin will bear any resemblance to our mocked-up version, but whatever the design, it will be a well-deserved tribute and justified recognition of a wartime nurse who made the ultimate sacrifice to help others.

Posted in 5 pound coins, Blog Home, Coin News
← When will I ever find a 2014 coin in my change?We’ve got your Commonwealth Games 50p! →