Which banknotes are changing, and when?

The Bank of England is issuing a new Polymer (or plastic) £5 note which will enter circulation on 13 September, 2016. You’ll start to see the notes in the following days and weeks. Around 5,200 ATM’s dispense £5 notes and most are expected to switch to dispensing the new notes within the first month.

How will the new banknotes change?

The new £5, £10 and £20 notes will be printed on Polymer – a thin and flexible plastic material. This means that the new notes will be cleaner, safer and stronger than paper notes.

They will also feature added security features. The five pound note will feature:

What size will the new banknotes be?

The new notes will be around 15% smaller than the current paper notes but will retain the traditional look of the existing notes, with a portrait of Her Majesty the Queen on the front, and a historic character on the back. The existing format of tiered sizing will be maintained, i.e. the higher the denomination, the longer the height and the length of the note.

Which historic characters will appear on the new banknotes?

What will happen to my old paper banknotes?

The paper notes will start to be withdrawn from circulation as the polymer notes are introduced. It is expected that by January 2017 more than half the £5 notes in circulation will have been switched for polymer notes.

You can continue to use the paper £5 note until legal tender status is withdrawn in May 2017.

What happens if I still have old notes after legal tender status has been withdrawn?

All Bank of England notes retain their face value for all time. If your bank, building society or Post Office is not willing to accept these notes then they can be exchanged with the Bank of England in London by post or in person.

Will I be able to use the polymer banknotes in the same way as paper?

Yes. Polymer notes can be used in the same way as paper notes. For example, they will be available from ATM’s and can be folded in a wallet. Brand new polymer notes can sometimes stick together, but this effect is short-lived once in use.

Why bother changing them?

The new notes are expected to last at least 2.5 times longer than the current paper notes. In 2015 21,835 notes were replaced due to damage from being torn, washed, contaminated, damaged and even chewed and eaten!

The new polymer material is resistant to dirt and moisture which means they will stay in a better condition for longer. Plus, when a polymer note reaches the end of its life, it will be recycled.

Will they be collectable?

Like any new issues, collectors will be keen to own the very first notes. Early serial numbers are likely to be more sought after – especially on good condition or uncirculated notes. 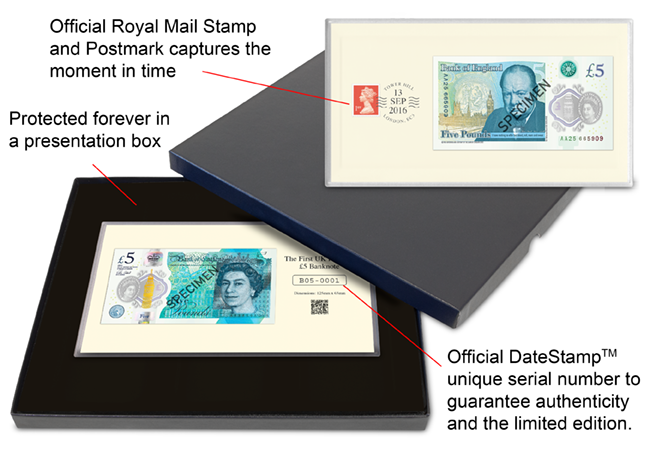