They’ve been a part of our lives for 33 years but the Round Pound Coin will be withdrawn from circulation forever on the 15th October this year.

Starting from today, we’re encouraging collectors across the UK, to join the biggest race of its kind ever held – The Great One Pound Coin Race.

It’s totally FREE to enter the Race and by entering you’ll be able to: 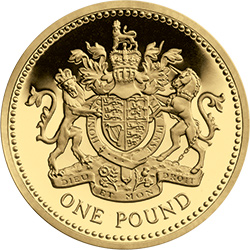 The first £1 coin entered circulation right back in 1983 and featured the Royal Coat of Arms as its design.  It was quickly followed the next year with a Scottish thistle design, followed by the Welsh leek, Northern Irish flax and the English oak in subsequent years.

In total 24 different designs have entered circulation with five different series representing the component countries of the UK.  The remaining four designs have all been variations on the theme of the Royal Coats Arms.  A final, twenty-fifth Round Pound Coin was issued by The Royal Mint in 2016 but it never entered general circulation.

Scarce £1 Coins still available for face value in your change

Of course some £1 coins are much rarer than others.  It’s partly because mintages of the different designs vary vastly, from less than 1 million coins to over 300 million.  But that’s only part of the story.  Older issues are also often more difficult to find, especially in good condition.

The three lowest mintage £1 coins in circulation come from a series of UK Capital City coins issued in 2010/11, with Edinburgh being the rarest with a mintage of 935,000 coins – just 0.04% of all the £1 coins ever struck.

But it’s still possible to find even these rare coins in your change along with all of the other 21 circulation £1 coins.  But only for the next 250 days.

Once the 15 October has passed, you will have little chance of building a complete collection of £1 Coins at anything like their face value.  So …

The Great One Pound Coin Race is on.  Start your race today, before it’s too late.