Last year we reported on the ‘Dual-dated £1 coin error’ where the dates on the obverse and reverse were different, one reading 2016 and the other 2017.

Now another £1 coin ‘error’ has been discovered and this one is very interesting indeed! It would appear that a 12-sided £1 coin die has been struck on an old round £1 coin blank.

In the past week alone, we’ve seen 3 examples of this ‘error’ coin.

The first was from a Change Checker from Burnham-on-Sea who told us that they’d listed the coin on eBay. After receiving 22 bids, the coin sold for £205!

One of the first examples of this ‘error’ coin has sold for £205 on eBay!

Another coin is being sold at an auction in London on Wednesday 21st February. The auctioneers, ‘Timeline’, who are based in Berkeley Square, describe the coin as an “exceptional modern rarity” and go on to say “…the coin is sure to attract much attention when it crosses the block later this year”. 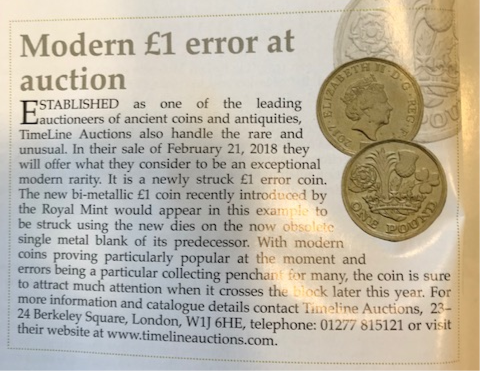 Another example of this latest ‘error’ will be available to purchase at auction on the 21st February. (Image: Coin news)

The third report we have received was this morning from another Change Checker. Our advice to anybody who believes they have found this coin, or any other ‘error’ coins, would be to send the coin off to The Royal Mint Museum who offer a free verification service.

They will send the coin back to you with confirmation of their findings, which can take a few weeks depending on demand for the service. Here is the address:

As yet, we have not seen proof that these coins have been verified by The Mint, so whilst they look genuine we will keep an open mind for the time being.

As usual, if you think you have found one of these coins or any other interesting ‘errors’, we’d love to hear from you.