Change Checker has released the first-ever scarcity index for £2 circulating coins. Following the recently published indexes for the Round £1 Coin and 50p Coin, the Scarcity Index tracks which £2 coins are the most scarce and collectable, using a unique combination of mintage, collecting and swap data to give the most up-to-date picture of today’s £2 collecting market.

Recent Issues are a hit with collectors

Recent releases have proved a hit with collectors

Whilst all the mintage information is still not available for these issues, intense swap demand and limited numbers of collectors who list the coins in their collections, suggest they may number amongst some of the more sought after issues for years to come– surely a reflection of the UK public’s ever increasing interest in new coin issues.

However, it’s the 2002 Commonwealth Games £2 Coin that tops the new Scarcity Index. Whilst almost 2,500,000 £2 coins were issued for the Games, it is only the most eagle-eyed collectors who fully understand the reason for their scarcity.

That’s because there is not just one Commonwealth Games £2 coin but in fact four different designs – only identified by a hardly distinguishable cameo design represented each of the UK’s constituent nations, Northern Ireland, Scotland, Wales and England.

The Scarcity Index does not necessarily equate to value but it is certainly an effective indicator.  For example, the Commonwealth Games Northern Ireland £2 coin commands a premium of 15 to 20 times face value of eBay.

As for the more recent issues that have made the top 10, it is perhaps too early to tell. But what is clear, is that more and more of the British public are checking their change in the hope of finding interesting or rare coins in their pocket – perhaps even the Commonwealth Games Northern Ireland £2 coin – you just have to be sharp-eyed.

The £1 Scarcity Index has already been published for the Round £1 coins and, because they are no longer being issued, this is now set in stone.  You can also visit the Change Checker 50p Scarcity Index, which will continue to be updated quarterly. 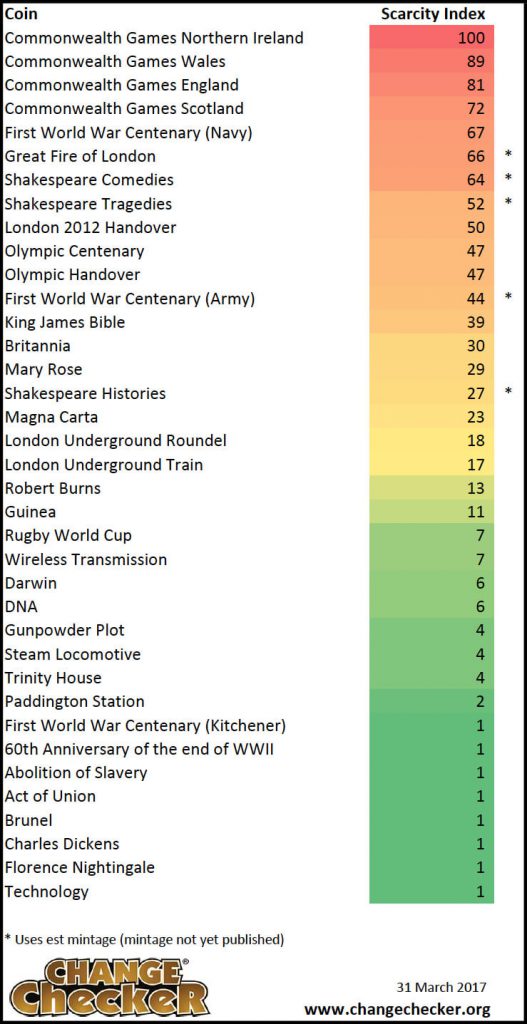 To receive a FREE notification when the updated Scarcity Indexes are published (including the new £2 Scarcity Index), please complete your details below